Lai Chun Ling from Hongkong told the audience the story of a shirt he fetched out of his backpack. It was a gift of his grandmother, who believed that it would help him to resist difficulties and to avoid trouble. So he took off his T-shirt to get dressed in the heirloom. Forcing an atmosphere of magic, he lighted joss sticks, to breaks the peaceful atmosphere by the projection of the image of a man aiming with a gun for tear gas or rubber bullets. Taking the beamer to move the projection of the image in a 360 degree angle into the audience he simulates that trouble is close. After putting the projector down on a stand, The artist lights more joss sticks, and fixed some of them in front of the mouth of the gun. Here he collected the ash they produced in a heavy metal bowl. Some time passed silently until he fetched a haircutting-machine from his back-pack to shave his head. 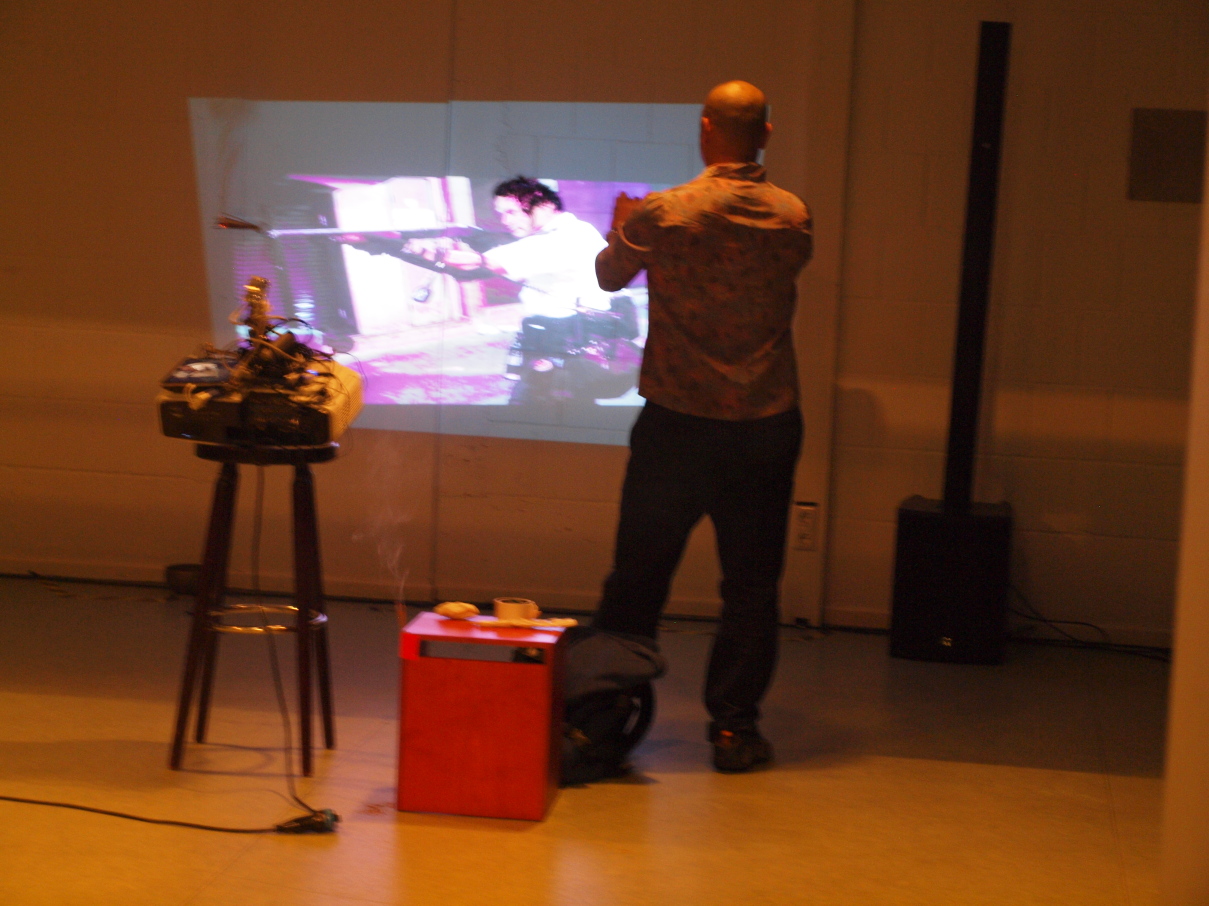 When he started to fix double stick tape on the projection of the bold-headed police man it became clear that he intended to lend his hair to the warrior to make him appear more civil. This act of assistance, which was executed in calm but distinct movements and in a peaceful mood made clear that it was the artist’s wish to include the man into the civil society, but unfortunately he himself had a bold head now.

In this solemn atmosphere every spectator realized that the situation is still precarious, especially as the 20th edition of the Festival OPEN had to take place in exile. Even after 19 years the authorities did not allow the festival to take place in the PRChina this year. The cooperation with Ilka Theurich made it possible in Hannover.

How to boil eggs with matches

The other performance was presented by Chen Jin, the founder of OPEN. He lighted hundreds of long-seize matches fixed on several apples as well as between his fingers surrounding three eggs on top of three bar-chairs. Can there be hope that the lighters fry eggs or do they only burn the fingers of the performer? Is it a metaphor of the situation in China? 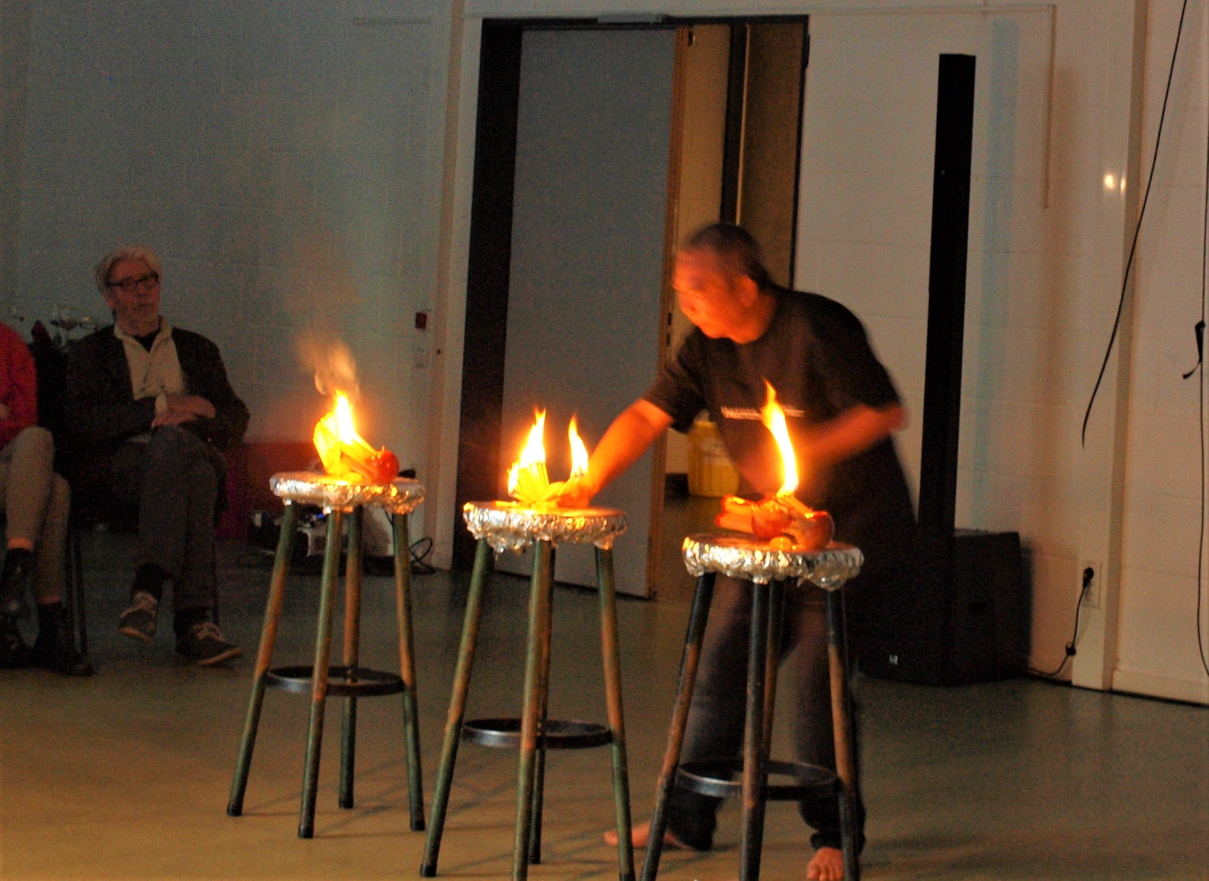 Although the situation in the Peoples Republic is unique it is hard to compare, we should remember that performance-art and Fluxus-events, which took place in West-Germany since the 1960s expressed hope of a revolutionary development of the society. However the happenings where not welcomed by the technocratic sector of a society, which does not care about the freedom of expression and art and tried to obstruct artists. Some of the events were policed or stopped. The situation changed not earlier than 20 years later with a new generation of curators; however the open promotion of performance-art was rare until the 1990s, when it became obvious, that performances could raise attention for museums, galleries, exhibitions and art-institutions.

Nowadays all types of events are welcome and the early impulse of liberating the visual arts has generated a blooming competition amongst artists and festivals. Artists also take advantage of the growing army of precarious workers. This year four Lithuanian artists hired human workforce and presented them in a way that we have not seen since the shows of aborigines in European circuses and zoos between the 18th and 20th century. This kind of post-humanist art is a result of total art under the regime of growing tourism and block-buster art-events. From the internal view of the jury the show of humans on sand was prized by the Golden Lion of the Venice Biennale 2019. The title of the international part of the exhibition: “May You Live In Interesting Times” sounds sarcastic for those, who work and fight for survival and for those who are under fire and extinguish fire.

An interesting fact to me is, that the Chinese artists in Hannover presented performances of magic and superstition, which probably seems to be a proper way to reflect a situation in which the taste of a mass society is completely devoted to Kitsch to produce “false feelings” in compensation for the stereotypes of consumer-culture and control of everything and everybody.

The participatory performances of To Yeuk from Hongkong in the corridor of the theatre offered measuring pulse and those who took part in it devoted their wishes to the people of Hongkong. 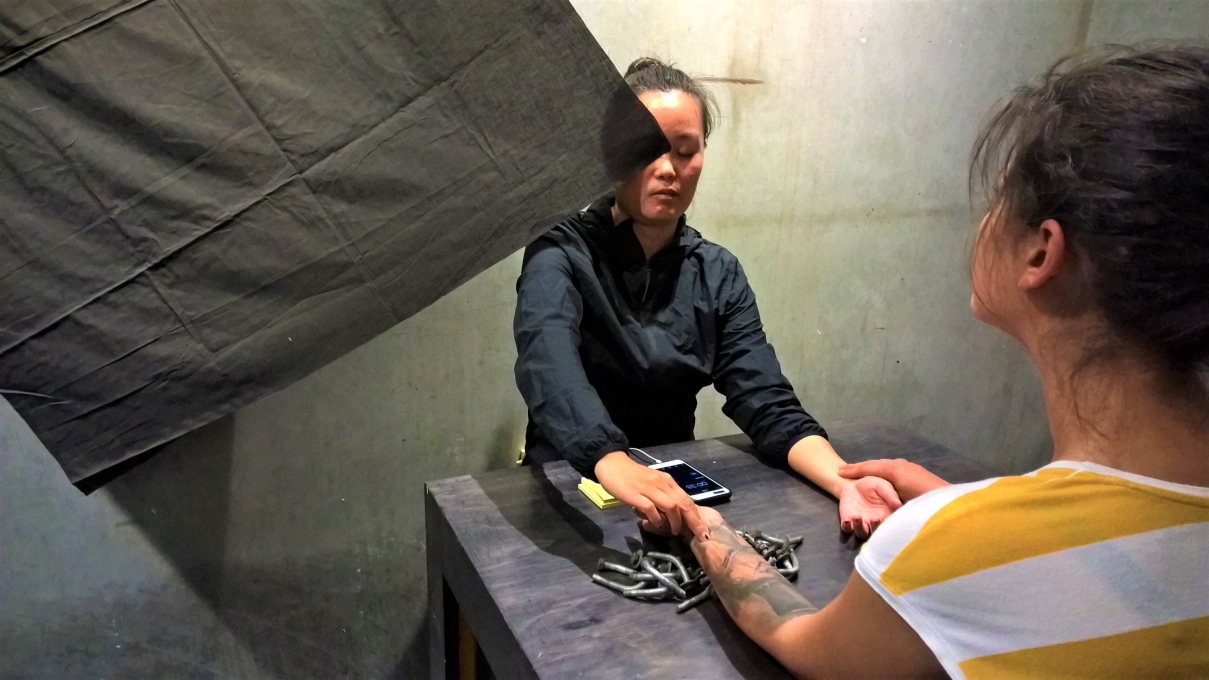 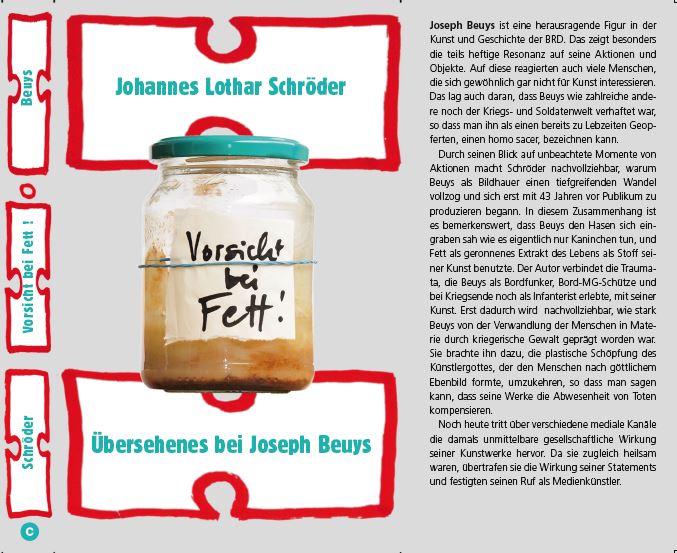