a)     Things Disappear or do not Fit Anymore

Tim Etchells read from manuscripts of his new book. Among the flow of observation in streets I enjoyed his reflections on 35 years of Forced Entertainment in which he discovered flow as well as containment. The latter word nicely contrasted to entertainment. I cherished that he mentioned the reuse of props, equipment and tools which were kept from previous performances. But unexpectedly all these items in case they are still available would not represent an overflow or material reserve. In contrary Etchell said, that every piece being reused would require a restart as well as a new piece and every performance of the repertoire in a new space.

Emcke and Eribon described escape as trouble which was initiated by their decision to leave their familiar background to become intellectuals. Both put it in relation to shame, which they suffered also because of their sexual orientation. While Eribon referred to the social class background of his family and childhood-milieu, Emcke said that the communication of her decision to become an intellectual to her “upper-middle-class” family was more shameful, while being gay reward her with pleasures, compensating for that shame. In contrast to this Eribon felt that the repression his working-class family enforced on him because of his sexual orientation deeply hurt his feelings, while his intellectual career helped him to seek distance. Thus it became an act of emancipation, although he could never fully separate the private and public spheres. According to Eribon the refusal of society to accept and discuss the term social class anymore would not help to understand the problem. He said that the workers of his hometown Reims had lost their pride, when steel- and car-companies closed down their plants.

Unfortunately the podium did not approach what the title of the podium “Beyond the New Hate” announced. In this context it is important to understand that not only did coal and steel based industries create the fundaments of the wealth of Europe but steel workers and miners also formed a political nucleus of the European Union. It was established to coordinate the European Steel- and Carbon-industries internationally. The mining industries also were the foundations for the car- and machine-industries and have established European worker-participation. So it is no wonder that the steel and coal-crises, which escalated in the 1980s, became a crisis of Europe and separated the worker-elite from the political union of Europe. 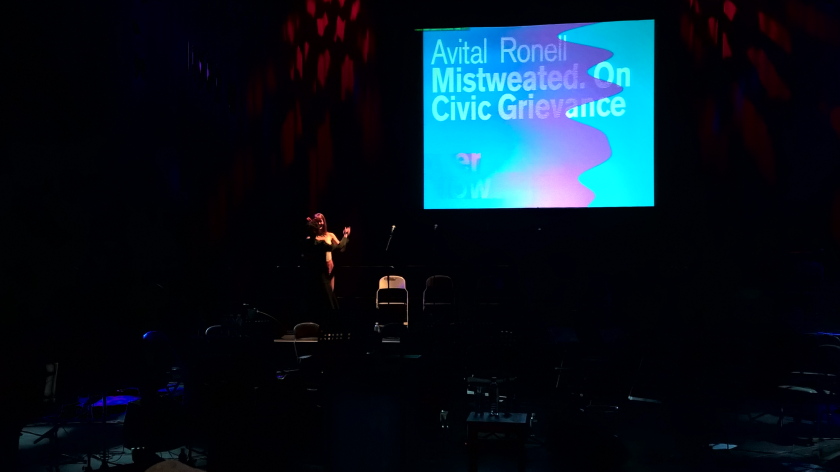 The crisis of the mining-industry was also a major issue in Donald Trump’s campaign. He took advantage of it addressing voters from the “rust-belt”, however without concepts in a heated world. This is no excuse for “mistweating” and “buffoonery”, which was addressed by Avital Ronell on Sunday-morning, when her lecture “Mistweated: On Civic Grievance” rivaled the sermon of churchgoers, as she puts it with Karl Kraus. Referring to an aggressive and sadistic behavior of the Potus, who is also known as a man being proud of “grabbing” women “by” instead of at the pussy. That provoked to ask for the nature of the object that is grabbed “by”? Is it the reel of the gangway of the big airplanes Trump fiercely holds, when descending. Trump fears descending and strangely feels also menaced by his German origin in third generation and pretends to have ancestry in Sweden instead. This should have helped him to avoid bad manners, encouraging bad behavior in political culture. (Theatre can educate about the tragic rise of protagonists such as Aturo Ui in: “The Resistible Rise of Arturo Ui” by Bert Brecht; added by the author) Ronell said that she felt attracted by the banner in front of the Kampnagel-doors welcoming refugees. Those who lost their homes and existence have to be welcomed every day, she remembered from her ancestors who found exile in America. She told that the book and the light of enlightenment in the hands of the mighty female Statue of Liberty encouraged her during her childhood. Later however she got to know that Franz Kafka – in his novel “Amerika” – had envisioned the Statue with a sword in her hands. 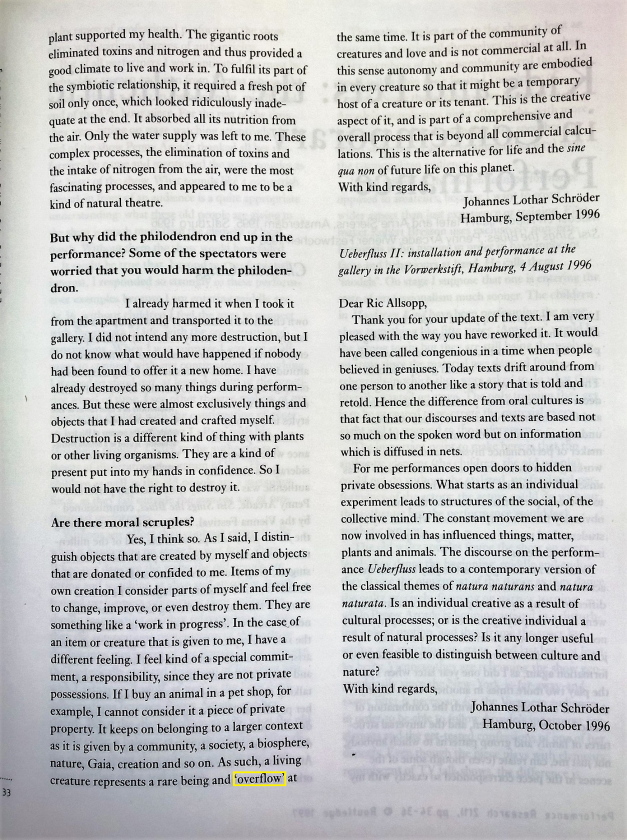