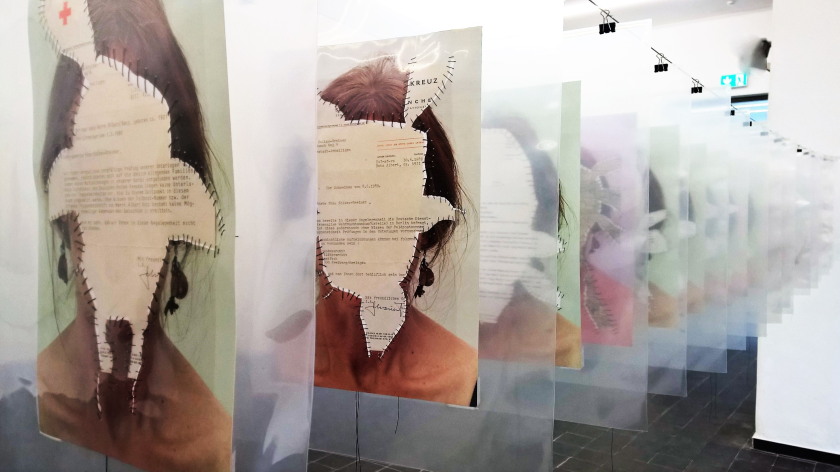 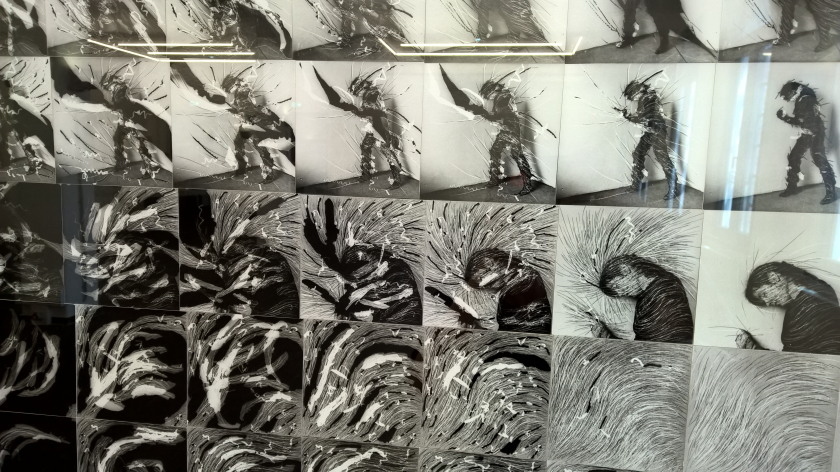 – In an other text in this blog, which is about the first opening of the Cabaret Voltaire 100 years ago please find diagrams of the photographs.

Compared to the reproduction of a lost painting of Marcel Janko, which shows the interior of the Cabaret Voltaire in Zurich, some contradictions appear in the photograph of Hugo Ball receiting his poem „KARAWANE“ June 23rd 1916. So there is the question: What happened in the bar of immigrants around 1916 and what did artists when not performing there to make a living in these hard times and to reflect the situation? 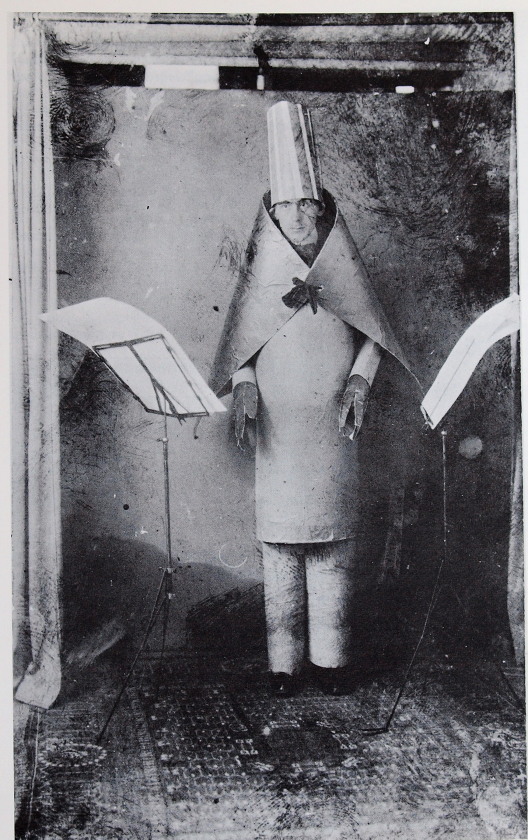 Examining the picture of Ball in his costume we see the artist-philosopher standing on a carpet in front of an undefined wall. It looks provisory and seems to be from cardboard or plywood. The curtain could deliver an argument for the stage but one of the manuscripts on the music-stands is overlapping it. This set does not look very much like a stage in a cabaret. They might have had curtains but why they cover the wall and not the stage?

Curtains in front of walls however are common however in a photographer’s studios. And there is an other photograph showing Ball in front of a camera around the same year 1916. The picture shows the same carpet; however a person appears in a different costume, which hides the face under a roll of paper with a huge “13” replacing the artist’s eyes, ears, nose and mouth. That makes him silent, without sight, dump and unable to scent. Topped with a top hat it represents a bourgeois, not being able to open his senses for the situation full of innovations and chances. 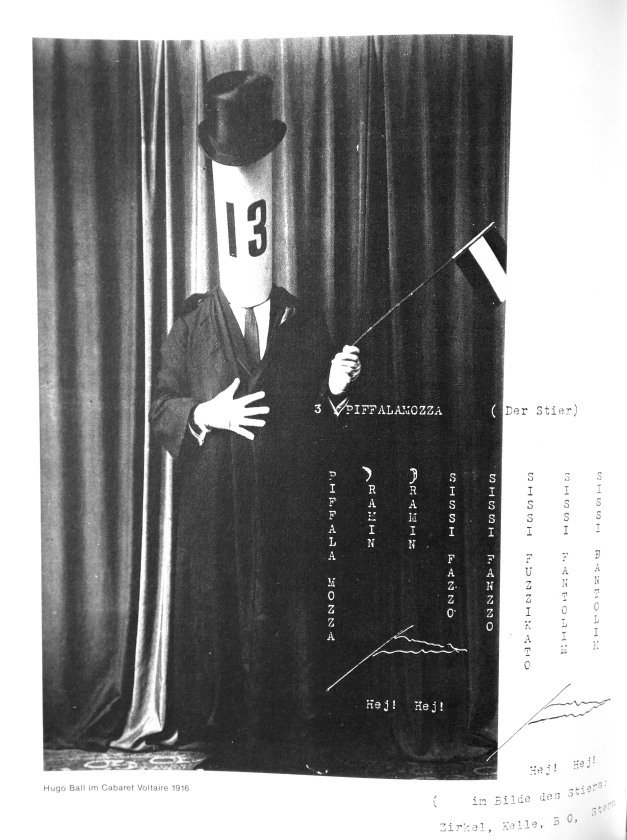 The way of innovations

The print of a lost painting of Marcel Janco of 1916 illuminates the space and the atmosphere of the cafe-house of immigrants with Dadaists performing simultaneously on a stage in front of a small space filled with an audience. Being aware of such a stuffed place filled with a smoking audience one may ask, where a photographer with a tripod would find a stand with a clear view during a life act on a small stage? 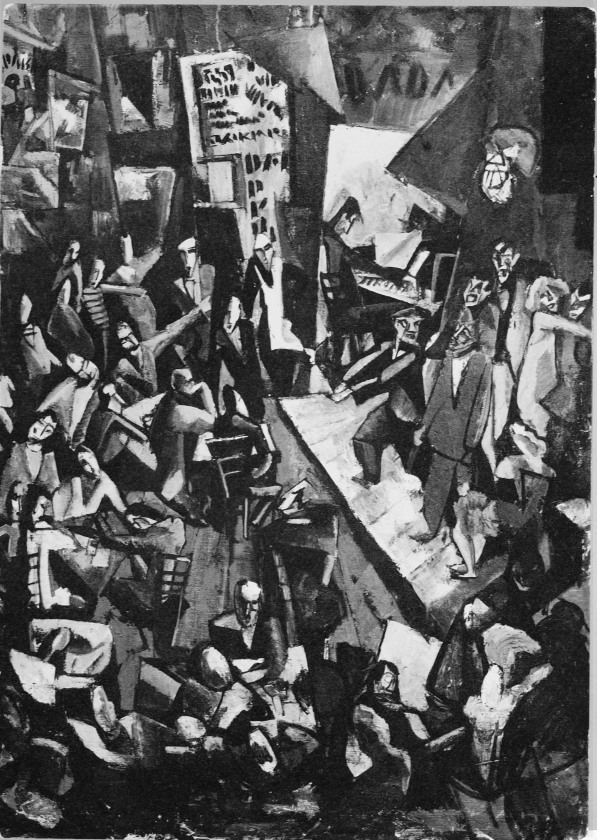 The observations on documents about the happenings at the Cabaret Voltaire and their quotations over the decades may lead an observer to reflect about the character of innovations. It is remarkable that artists and researchers have been attracted by the few documents about DADA, especially the rare ones about the short Dadaistic career of Hugo Ball, without getting to the crucial point in it. Finding the Dadaistic spirit in chaos and anarchy they missed the nicely planned and directed part in the work of Hugo Ball who was smart enough to consult a professional photographer and rehearse the visual part his performance in a studio. As the former dramaturge of the Münchner Kammerspiele he and the unknown photographer were able to produce the relicts of his ephemeral artworks for the future and to create an image, which looks as if it was taken during the performance. Taking that in account it becomes obvious that it is the un-authenticity of the image, which is responsible for the iconic character it has for DADA until today.

Also the typography of the poem is famous, although it is not fully understood either. We do not know how it sounded in 1916, but nevertheless we call it a sound-poem, as the changing characters give the idea of changing voices. Both of the documents of “Karawane” are “simulacra” in the sense of the “hyperreal” (Jean Baudrillard) that transform the surface of everything undergoing the forces of human activity, which is making everything “real” but destroying its metaphysics.

To give an idea of that, which is destroyed, Ball described the performance very precisely in his diary and called the reading of the poem different from the visual appeal of the poem in various types, monotonous like a litany. By giving it the appeal of a collective ritual in catholic churches Ball recalls the metaphysics missing today. It was not only stress that motivated him to leave the dada-circus shortly after that and beginning his study in the history of Christianity. He was a taboo-breaker and doing so he became aware of his time, which makes him after Nietzsche a protagonist in reflecting the trap of modernity.

Referring to Balls writings on “Byzantine Christianity” in the 1920s it becomes evident, that the “Bishop” of “Karawane” was one of the “saints” and “heroes” Ball was searching for, when he looked for ways to tame the “furor teutonicus”, which he was part of. At the outbreak of World War I Ball himself tried to become a volunteer in August 1914 however he was invalided out for health reason. It becomes obvious, that he worked on the attraction of war, which got so many artists and intellectuals, who – surprising to us –  were excited by war and numerously volunteered. Being aware of this we can see that Balls turn to his two iconic figures is a way to seek distance from that involvement and find out way he became intrigued into this. In unpublished notes for a foreword to his polemic “Kritik der deutschen Intelligenz” (Bern 1919) Ball states, that the gesture of “the rebel disappeared”. Instead he was seeking for ways to integrate the desire of the savage, which was another big issue of DADA.