(scroll down for german version)

Curtains are closed behind locked doors and windows of the houses, which Yoshiaki Kaihatsu photographed in 2012. The empty houses of Iidate do not really look like those in ghost-towns, as they are in good shape. However you cannot tell, what has driven the inhabitants out of their houses. You have to read the plates, which inform you about the breakdown of the atomic reactors in Fukushima, and Iidate is located in the decontaminated zone. The inhabitants had to leave their houses although the latter were in a proper condition. The citizens had no idea when they would get a permission to return home or could ever return at all. No reason is visible why nobody should live there. The whole situation seems eerie.

In contrast to this the series of photographs, which Kaihatsu took in Kesennuma City, show destroyed storefronts, and you can see that there was violent force at work, which made the people homeless. For a photographer the two types of destruction are quite precarious, as it takes into question the quality of visibility, which he refers to. Many contemporary crises, which the title of his exhibition “Naturkatastrophe Atomenergie Disput Terrorismus (Natural disasters, Nuclear energy, Dispute, Terrorism)” refers to, are like this.

It is the crisis of the visible, which affects Kaihatsu as a specialist of visual arts. While his problem is academic the inhabitants of the contaminated parts of the province of Fukushima who have to live in camps, baseball-halls etc. without knowing whether they will be ever allowed to return to their houses are doubly traumatized by the disaster and by the uncertainness of living under provisional conditions. This motivated Kaihatsu to interview these people who cannot understand why they have to stay away from home, while the government pretends that the radiation is under control. There are a lot of areas, where helpers collected the soil in plastic-sacks displayed on the ground as far as your eyes can see. So they did something, which is visible, which signals that action has been taken. For most of the people it is not so clear that this is only provisional, just like the storage of the radioactive water in containers that are already rusty after 3 years, while they should be able to keep the water for centuries or millennia. The public work-force is waiting for new instructions.

Meanwhile Kaihatsu has been busy and has built a simple cabin, which is as wide as four tatami-mats. A wooden plate informs that this is a „house for politicians“. Until now he has invited 750 of them to spend some time in the hut, which is located right in the contaminated zone of Fukushima. Kaihatsu is sure, that a stay in the decontaminated zone will inspire politicians to find lasting solutions to solve the problem, which was not caused by the tsunami but by humans who assumed that atomic energy would be safe. Convinced of being able to control nuclear energy the Japanese Government has decided to continue using nuclear power stations.

Kaihatsu is an artist, but why does he take over the initiative to build a log cabin?

This probably is a question of the achievements of modernism, which paradoxically can lead into chaos by using methods of rationality. The risks of our time are made by humans and have produced results which often exceed the destruction caused by natural disasters. During the last two decades culture has faced not only uncontrolled escalations of financial markets, nuclear energy and terror, but additionally we see climate change and possible totalitarianism developing from the global net, misused by governments, criminals and companies.

Kaihatsu’s use of photography by goes back to the pioneering work of Ed Rusha, who in 1965 pictured all buildings of the sunset Strip in Los Angeles, which he displayed in the form of a leporello.

The fixing of the status quo became also a sample of pictures which make evident, that the status quo is only temporary, as the quick change of things like buildings, fashion and cars in streets is under way.

The possibilities of conceptual photography have changed the way to prove something, what is visible. Traditionally the buildings of a street were checked by architectural maps and the land register, while today the visual media records information and later serve to realize the change. Paradoxically the use of the visual provides less and less information, as it is limited to optical phenomena, while advanced technology and the use of information become increasingly dependent on the use of  forces of the micro- and macrocosm, which are not visible at all. 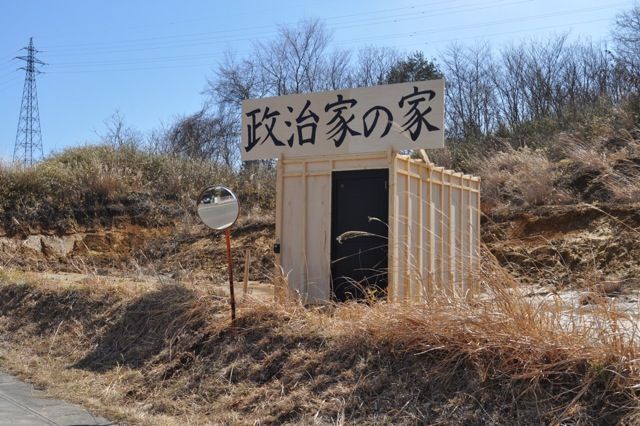 That’s why existing habits of looking at things make it impossible to judge on the debris of atomic energy plants in Tschernobyl, Fukushima and other places. We are senseless for these hazards. Hidden beyond the capability of senses it is easy to forget the debris and chaos of modern culture. Are visual artists helpless though or are they able to widen their horizons and cope with the problems which civilization causes?  Kaihatsu’s idea to invite politicians to come and meditate in his small cabin is a step. But apart from politicians there are immense numbers of people who have to reflect the invisible, and should be invited for meditation to sharpen their minds to face and reflect upon contemporary conditions.